I am sitting on a rock in waking light. It is 5:22am. There are two large sea turtles several feet from me. We are ten feet up from the water’s edge. They’re asleep in the way that only turtles sleep. Humans seek life in other beings by looking for small swells of breath. My human heart has stopped looking for life in breath now. After several days, I am learning to sit with turtles while they sleep. My nervous system recalibrates when I hit this beach. I’m finding turtle mode. I’ve stopped expecting them to be like me. And started slipping down into quiet- like them.

On these mornings, it is a long wait for signs of life. Humans have been around for three million years. Turtles have been witness to three HUNDRED million years. They are in no hurry to wake. And I am in no hurry for the night sky to give way to day. I’m watching the turtles but I feel the dusky horizon go from gray to purple to pink. Turtle shell lines gradually become visible as the lights of Wailea start to sparkle across the bay.

After four days on this beach, I’ve seen the same batch of turtles bask in the hot, afternoon sun every day. I’ve learned to time my comings and goings carefully. I’ve seen how they poke their heads up out of the water, closer and closer to shore when they’re ready to nap. I now know they wait until they think there is no one around before they hokey pokey out of the water. I steady my breathing and spy on them. They depart from the sea in time with the waves like a kid enters a circling rope to start jumping. Three, two, one… a final wave delivers them from swim to slither. There is quite a long pause. And then the slow march starts. Turtles use a rest-step like mountain climbers. But they rest between steps in the cadence of a species that has been walking for 300 million years.

I am fascinated by the way these particular turtles seem to use rocks for pillows. They rest-step their way up the coarse sand until they locate the right cluster of rocks. They look veeeerryy slowly from left to right. And then find the perfect chin-rest. Sometimes it seems like they doze for a few minutes, like we do- occasionally blinking and moving their lower jaws around contentedly. Sometimes, it seems, they sink, like rocks, into prehistoric sleep as soon as their heads hit the pillow.

Last week, in another bay, I spent my days in the water with turtles. Shadowing them. I saw them forage among coral, followed by wispy clouds of little fish. I treaded water, awkwardly while they hovered- pure grace, in shards of sunlight. Once, caught in an upswell, I got tossed along with two turtles, against rocks. For a quick moment I was one of them- we were compadres- struggling together against the elements. Then settling with relief- back into our routines- once the danger passed.

For a while, Mike and I stalked a turtle that was several times the size of our bodies put together. He was busy plucking around in coral. We could tell by the length of his tail that he was male. He looked up at us once. I was startled by the size of his head. It was larger than my own. His gaze was serene. And the scaly camo pattern of his skin, more vivid than I had imagined. He went back to being busy and we left him to his work.

This morning is my last. What I have dubbed my “turtle tour” will end today when we leave sunny Maui for snowy home. I have yet to see a turtle wake, get turned around, and return to the sea. I am not sure why I am so captivated by their travel. Every awkward movement seems like a gift. And I am the luckiest human alive- here to receive it. Maybe it’s because the movement of turtles is so different from my own. Their patience on land and their grace in water both elude me. Last night, when I left, there were twelve turtles asleep here, in this spot. Now, there are two. I sit on my rock. I’ve learned to spy so they don’t seem to be bothered by my presence.  On this beach. I have slipped down into quiet. Again.

The light changes. Time passes. I doze, upright, swaying a little. I hear some sand move and startle awake in time to see the turtle closest to me turn easily around. She pivots on her belly, her flippers articulating in muscular waves. (So that’s how they do it!) And then there is the pause- as always, just a beat longer than my human heart thinks it can take- before she starts her full body rest-step toward the water.

I do not know how long it takes her to get all the way down. I take a deep breath as she finally goes from slither to swim. The dome of her shell disappears. Another turtle pops her head up in greeting. As if to say to her friend- “Yay! Welcome to the day!” And in the same moment, I turn and realize Mike has been sitting just a foot behind me on another rock. He smiles, surprised I was so unaware. I realize I’ve been breathing slowly. And holding still. For a long time. It is only ten feet from where she slept, down to the water. But I feel like we just traveled together for miles. In the cadence of a species that has walked for three hundred million years. I am learning. 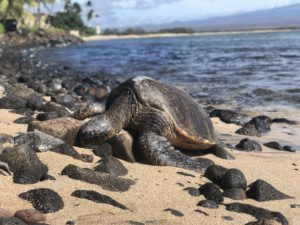 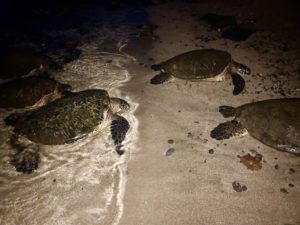 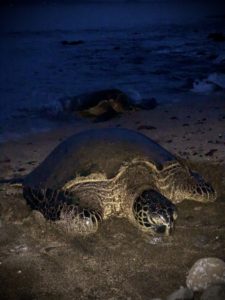 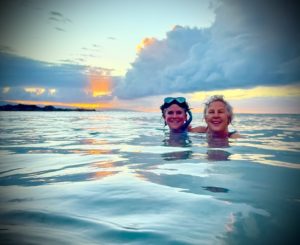