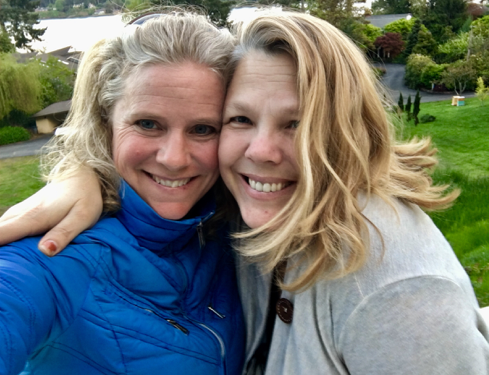 My friend Kirsten is in Fiji.

She’s got a pool out her back door.

She’s there on a six-month contract with the World Health Organization doing what she loves.

She eats tropical fruit for breakfast and market fresh fish for dinner.

She’s setting up programs that will improve the nutrition and lives of kids in Fiji for years to come.

She gets to come back to her job here in the US when the six months are up.

The week before she left, we got together for dinner. She was glowing. SO excited.

Nine months ago we went for a walk. She was suffering. She felt trapped. I remember…

The sadness flowed off her in small waves. We followed her sweet little dog along the trail and traded tales. I was preparing to leave for Thailand- my grand adventure!

She was feeling resentful in her life. Wanderlust and longing hiked along side us.

She was carrying the burdens of obligation and love and security. She was thinking that she had to make a choice between her dream and her family. That being a good mother meant that she sacrifice her own passion- that she put her head down and ignore the voices calling to her. She thought it would be years before she could answer them. Her son is in sixth grade. Her daughter needs her as she prepares for college.

Kirsten was consumed by a sense of obligation and commitment to her family and her job. She felt guilty for feeling trapped. How could she have so much and want more?

When we met years ago in the Peace Corps, we were fellow adventurers. We were idealistic and passionate about saving each our little pieces of the world.  Now, we both know what it means to have roots. To be bound by love to kids, jobs, partners and four-leggeds who rely on us.

During that walk- the friendship rubber hit the road for me. I felt expansive and excited in my own space and I felt frustration and pain in hers. Some ingrained response in me wanted to shrink my own joy so I could snuggle up with her in her pain. In that moment, we were fully capable of doing what’s easy- full blown pity party about the longings we can’t satiate and the dreams we’re “not allowed” to have anymore. It would have been an unremarkable conversation. Forgotten by now.

I felt myself start to shrink and then I remembered who we are and how long we’ve been friends. What if I stay big in my joy and invite her in? Is friendship about getting small with one another or about lifting each other up? It’s about the latter, damn it. With each step, we found new cracks in the very foundation of the wall she’d constructed for herself…

“Do you know for sure that you can’t afford it?”

“Is I really true that they wouldn’t hire you? Where’s the proof?”

“What do you have to lose by doing some research and putting out feelers?”

“What would it be like to show your kids you are not only a citizen of your family, but a citizen of the world?”

We did not solve anything on that walk. It was not comforting. Wanderlust and longing still crowded the trail. I drove away feeling a little bad- the pity party would have definitely felt better in the moment. Safer and more kind.

But a few months later I got a call. Kirsten had news she wanted to share with me. I could not call her back fast enough. “I did it! I got a six month contract with WHO in Fiji.” She’d chiseled away at those cracks. Done the research and filled out the applications. Her kids were thrilled for her. Their dad was stepping up. Her employer was giving her a sabbatical and the contract paid more than her salary. She told me our walking talk had been a turning point for her. She doesn’t know it, but she gave me an incredible gift in that moment.

I like to think that I adhere to that elevated definition of friendship but there have been so many times that I shrink instead of rise and times that I’ve let others do that for me. Sure- there’s always a time for pity parties and the cathartic bitch session. We need those. But we also need to hold tight to our big joy when we see our friends floundering. I always say that, as a coach, it’s my job to hold a larger vision for you than you may be able to hold for yourself. This summer, Kirsten has helped me remember that this is true for friends as well. Bon voyage, my friend!