My friend, Emily Jane and I agreed. When both our sons had graduated from high school, we’d take a trip. At first, I think we both just wanted to have a fun adventure and indulge the wanderlust we’ve shared since we met in China as sophomores in high school. But as the time grew closer, we realized that we were craving more than a trip. We were both ready to celebrate a new phase of parenthood. And I was ready to cross a threshold into a new chapter in my life; to dip my toes into some new, as yet unidentified or tested freedom; to wander more deeply into myself as a person and as a pilgrim on this earth.

I have long wanted to do the Camino de Santiago. I was blurry on the details about what it actually entailed but I was intrigued by stories I’d heard and romanced by David Whyte’s poem, Finisterre. We started actually planning the trip over a year ago- learned there are no less than 281 different routes- and decided on The Portuguese Coastal Way. We would walk 174 miles up the coast of Portugal, into Spain. Like a dock appearing hazy in the distant fog and then suddenly taking form as you bump into it, our long awaited trip has arrived. We’re doing it! 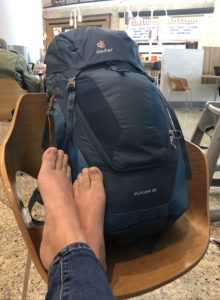 After two planes, some precarious Segway riding in Lisbon and a train, we spent a day in Porto before picking up our packs and heading north. All I knew of Porto before we arrived is that it’s the second largest city in Portugal and famous for port wine. I’d heard people describe Porto as their “favorite city, better than Paris!” but this was my first time in this part of the world and I had no idea what to expect. Exhausted after what seemed like days of travel, what we saw out the windows of our Uber to the hotel, seemed less than promising. We discussed sleeping instead of exploring during the one day we had in town. Thank god, we rallied after some coffee and a sit poolside.

Walking the streets of Porto was like opening presents- one delight after another. The joyful bustling of boats and birds and humans along the shore of the Douro river is contagious. Steep, cobbled ally ways are a tangle of ancient, hand laid stone underfoot, colorful flags overhead, and centuries of graffiti, alongside. We were made diminutive by The Cat, flirted with a Fortune Teller for a blessing and found the magical Lello & Irmão bookstore. We crossed the Douro River on the longest double decker bridge in the world to Vila Nova de Gaia where, sipping coffee in the sky among gulls- we looked down over the river and the city we’d just explored. It was quite literally, a bird’s eye view. I could not help but be struck, up there, by the magnitude of what human beings create. The participação of people in art, in science, in community, in ideating things before they exist and then building them. From dirt, stone, water and wood come cities. Ideas and goods and knowledge have accumulated to an abundance that would have been unfathomable to the masons who laid these streets stone by stone. I imagine a grandmother in 1155 looking up to see an airplane or a child in the middle ages confronted with an iphone. Threads of faith and story and science have been passing hand to hand and head to head since time began. And now, the fact that the cobbles in the streets of Porto were placed individually by hand is as magical to me as the internet would have been to the man who placed them. 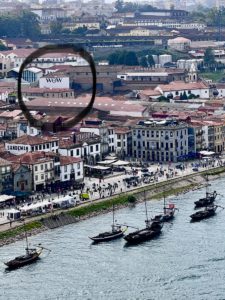 I am choosing to do this pilgrimage as a way of crossing intentionally from one chapter of my life into another. For me, it represents a threshold crossing- in my heart, my mind, my body, my spirit and in my work. Just before we encountered this startlingly beautiful, purple mime, Emily and I had been discussing our conversations with our 25 year old selves- about the idea that wisdom moves two ways- we would have as much to learn from those 25 year olds as they would have to learn from us. It is no mistake that Flor’Art would hand me a blessing in the form of Ariadne.

“Ariadne is a protectress, pathfinder and guide. She spins the threads that govern our fates, and weaves them together amongst the stars where she resides. To receive Ariadne in a reading is a great omen. You have a powerful ally that will come to your aid and help you out of the dark labyrinth. Ariadne in a word: GUIDE.” 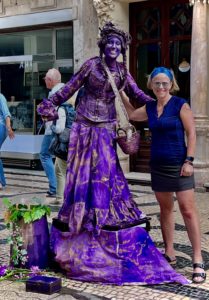 OUR LADY OF SORROWS

I am not normally moved by religious imagery. When I came across this depiction of Jesus and Mary in a niche in a church in Porto, however, I felt momentarily stunned. I know now that the swords represent Mary’s seven sorrows but in that moment- I could feel only one- the agony a mother must feel when she loses a child. Our Lady of Sorrows. 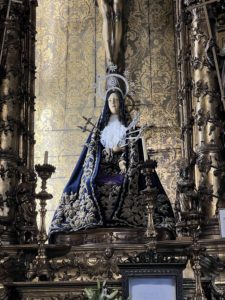 “This is my desire for a world in continuous change; the agile wisdom.” This quote, carried by a fairy in The Cat mural, will follow me on my pilgrimage. Cats are everywhere here. The agile wisdom they embody will likely come in handy along The Way. 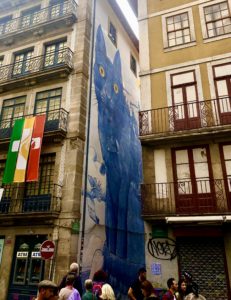